Not Fit for the Park 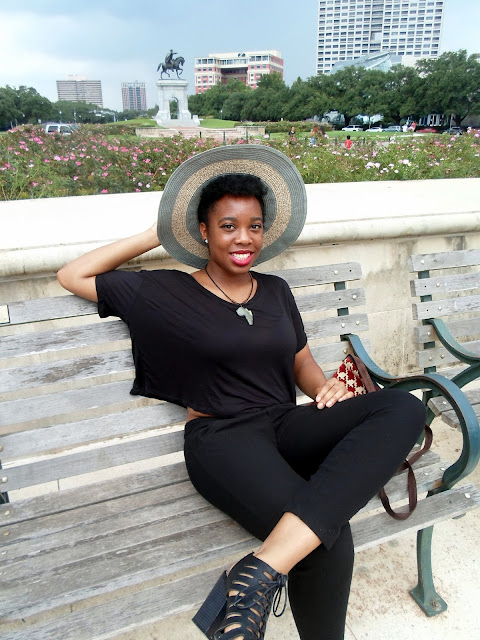 No, I am not in some knock-off historical-looking European-type place or any whimsical forest. This is Houston, Texas, baby. Hermann Park, to be exact. My college roommate (reunited for the weekend, after three years apart) and I took a stroll through the park to get out of the house on Labor Day and finally see the Japanese Botanical Gardens.

I only wore the heels because they best suited the outfit and I couldn't help but think about my sister and my mom. My sister, because she used to tell me all the time that flats make you look frumpy, and my mom, because she would never wear anything without some height--wedge, high heel. I was going for style elevation, ya'll!

I only wore the hat because I pinned up my free-form faux-fro in a way that invited a hat. I only wore that loose crop top because it was a style risk for me. I usually like the look when I see it on other people, but could never imagine myself wearing one unless I could take a mallet to my stomach...or, say, exercise a little more. And I only happened to own something to take a style risk with because the top was 50% off at Buffalo Exchange the previous day.

All black outfit, all neutral accessories? Surely red lipstick could be the only way to go. Pretty nice all together, I think, but definitely not fit for the park. The wind challenged the hat. The humidity challenged my comfort. But I should have known lol. I felt a little foolish walking over wet, rocky, and muddied pathways amidst tennis shoe-clad people also strolling and barefooted children running through shooting water. But only the smallest amount of foolishness, just a smidge. 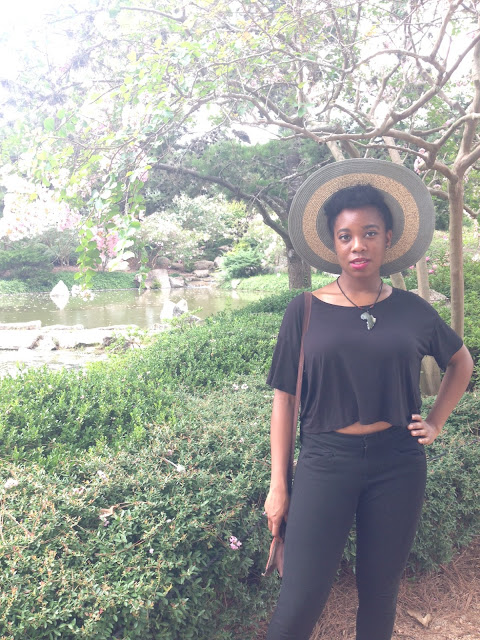 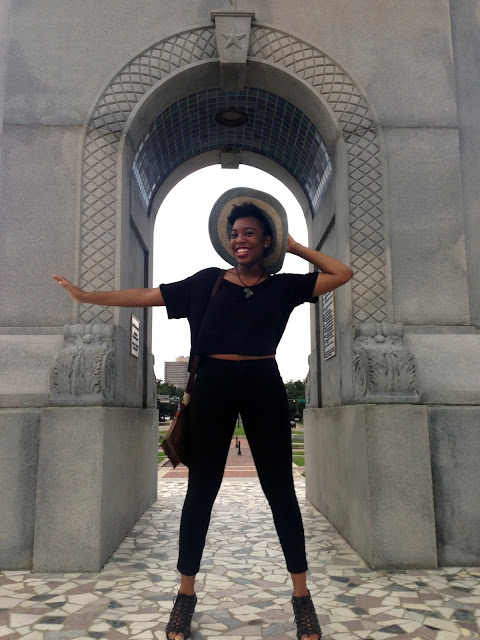 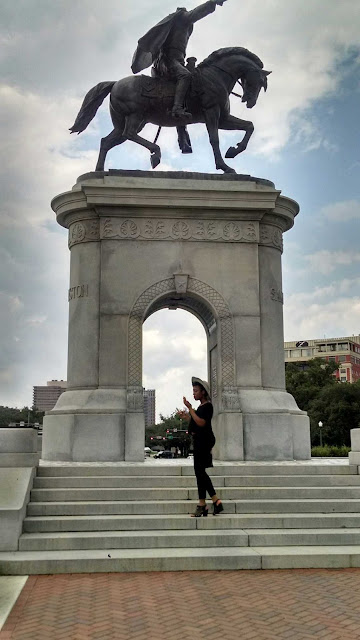 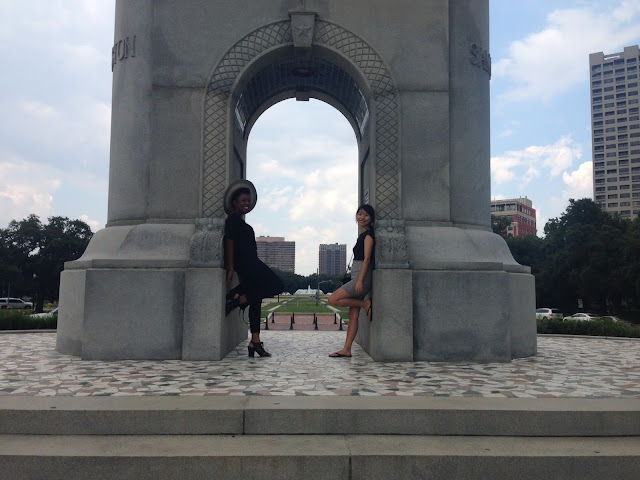 What I'm Wearing:
some pants and some top with some shoes and a hat. also an Africa necklace from Nigeria and an elephant bag from South Africa. [being cheeky today :p]
Posted by uia No comments: 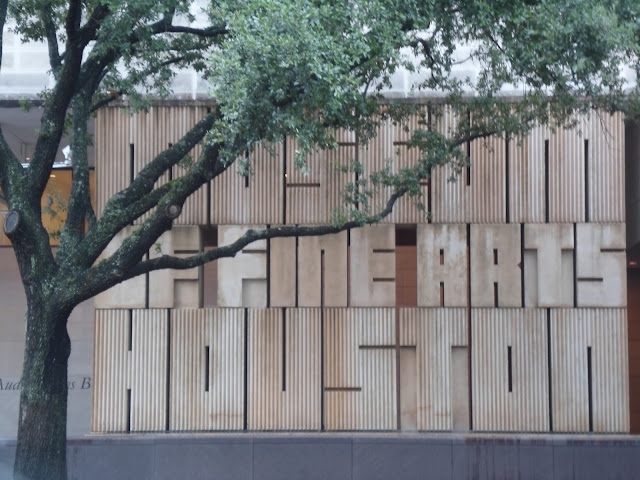 #14. Visit half of the museums in Houston's Museum District (there are A LOT)

One. So far I've visited one museum. Or rather one and a half (the second exhibit at the CAMH* was under construction, awaiting next day opening). At such a slow rate, I don't see how I could possibly visit half of the Museum District before 2016, especially now that regular school is back in session. Should I amend this bucket list item? Should I amend ALL the bucket list items?! Because I sure haven't run any 5K or gotten strong enough to do more than five push-ups. Four months left. :o

The Museum of Fine Arts, Houston, free to the public on Thursdays, is magnificently expansive with the coolest exhibits. Check out Shadow Monsters below. A very non-traditional display, not what most would expect to find at a museum. The installation has three huge projection screens and a bucket of random props--bent hoola hoops, crowns, and hats. When you move in front of the screens, monstrous appendages appear off your shadowed body and props. The fascination and amusement last for almost ever, until the whole run ends after November 1.

Shadow Monsters was a nice highlight, but the rest of the sections I strolled through were just as nice. MFAH has its many traditional collections in addition to special borrowed or temporary exhibits--often the ones that cost a little extra moolah to see. Actually, the first thing I visited was this history of photography presented on two sides of a pathway. I am so enraptured by the idea of photography, so that was cool to look through. Technology (and those innovators who create it) is so amazing. To go from daguerreotypes to film to digital, from black and white to color, from dullness to the sharpness of HD-- the progression is interesting to see, especially when we live in a time where taking a photo is so effortless. As easy as it is, I do think we're losing an element of sharing photographs. They're now all trapped on flickr, photobucket, Instagram and Facebook. Forgotten almost as soon as the day they're posted, to make room for the next set of photos to like and favorite. We should at least print the special ones. Make simple albums for keepsakes. Yes...


*The Contemporary Art Museum Houston only hosts two exhibitions at a time, it seems. Whispering Bayou was open while the new one was in progress. This one was also somewhat interactive, like Shadow Monsters, but quite underwhelming to me. But since the CAMH constantly offers new and unique exhibitions, I'm sure there will always be something to interest a variety of people. I'll probably go back...to the CAMH and MFAH. And maybe some of the others...eventually.

Hip Hip Hooray for Monday!
For Moo-Moo Ze Umz!
For culture and intellect and throngs of beautiful people to people watch!!
Posted by uia No comments:

Flirting With My Boyfriend (Jeans) 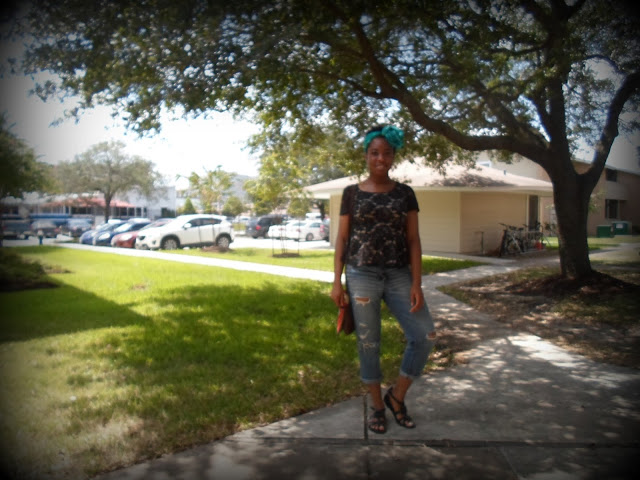 Oh, is that a pun in the title? If it is, how great is that? The purpose of puns, sometimes, is to be amusingly lame. No matter, the lame title stays because I don't actually have a boyfriend but I do have these boyfriend jeans. These non-stretch jeans that I never expected to wear as often as I do. Also needed to add some context before disappointing anyone with a misleading title...unless, you know, I'm currently flirting with my (future) boyfriend. Well...

I just thought I looked cute in this: a flirty, feminine top and pants with rips on purpose. I remember when my dad pointed out the rips a couple months ago, as if I didn't know they were there. His expression and response when I told him I bought them that way...still makes me chuckle. Again, with a headwrap to front like my hair is fly. Still perfectly mismatched for a Sunday afternoon, I think.

Coffee in the Morning

Regular early mornings this summer have me rebuilding an addiction to coffee (or liquid brown sugar-- I like it real sweet). Despite my reliance on coffee's caffeine, I think that coffee is fake. She and her caffeine qualities only mess with your mind, leading you to believe you're more awake or more energized. It's all psychological. Plus that coating/mask she leaves in your mouth to let the whole world know what you've just consumed is so rude of her. Do not abandon breath mints or gum in times of coffee consumption. Please.

However there is a coffee I do believe in. Miguel the R&B singer made it and he makes it well. Have a listen.

Good morning and happy Wednesday!
Posted by uia No comments: 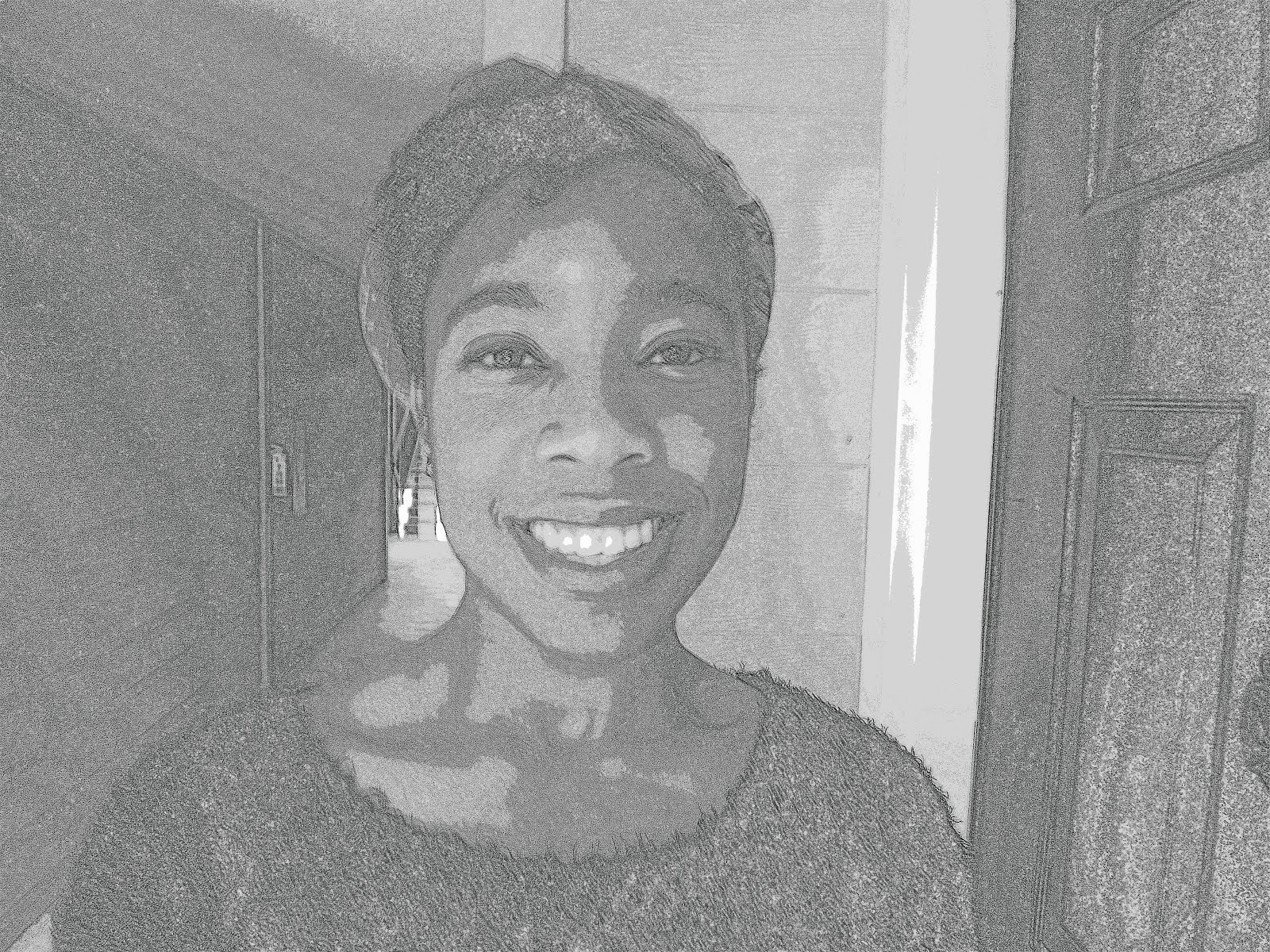 Hello beautiful people!
I'm Uche and Extraordinary Too is a place meant for me to share photography, ramblings, and some things I wear. I think our best ordinary is extraordinary and I am inspired by all sorts of people who are awesome, bold, and unashamedly themselves. That's the kind of person I try to be. Anyway, I hope you like what you read and see. Thanks for stopping by!